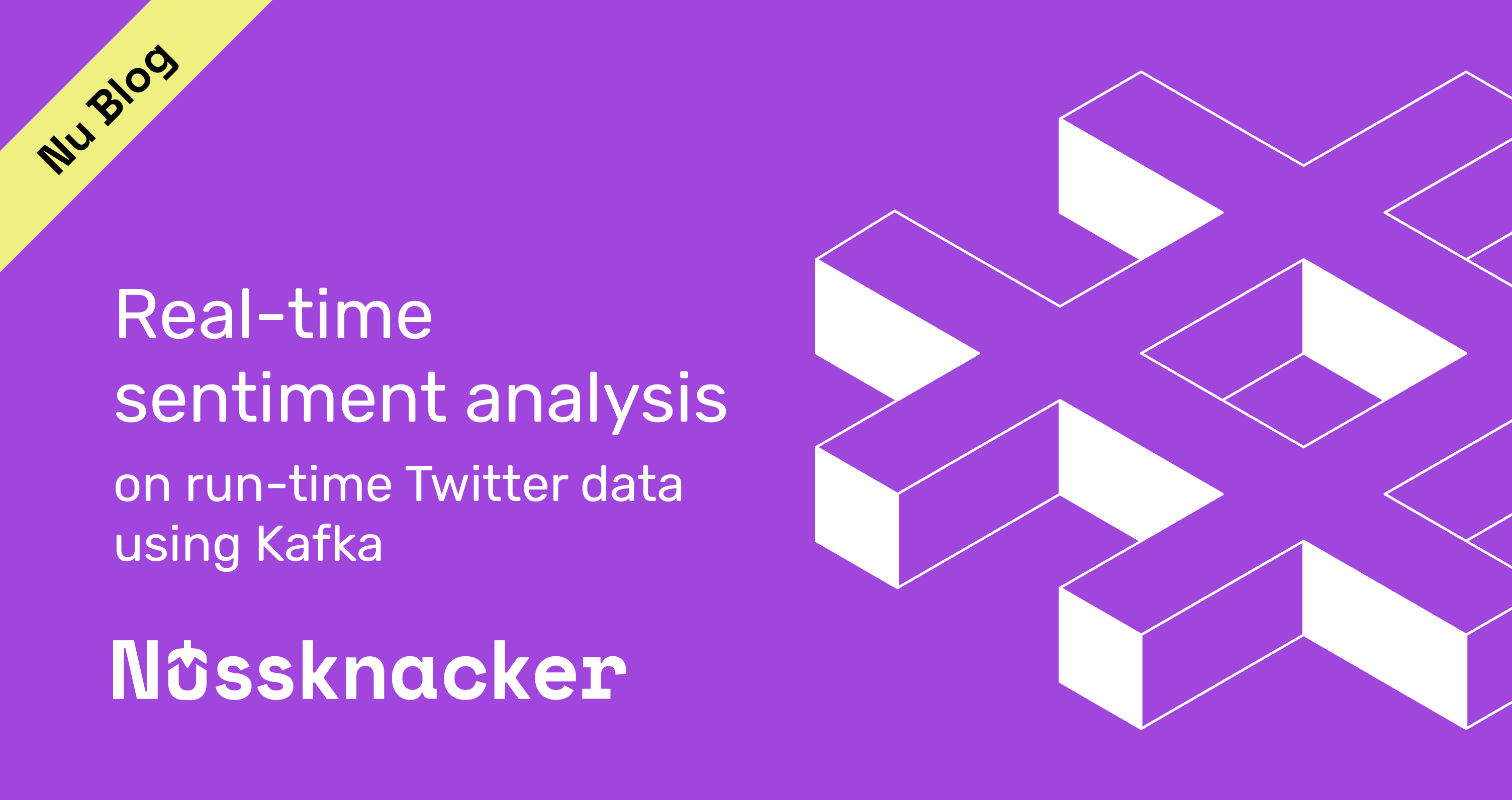 This challenge will be a little bit harder than it might be because recent months are not only a time of changes in Twitter company ownership and structure but also in Twitter’s API. This new, v2 streaming API is still not supported well by many libraries

In the example, I’ll run an analysis on a random 1% sample stream of all available tweets on Twitter. The first step is to make tweets available on the Kafka topic. To do that, I forked the Kafka twitter connector and rewrote it a bit to make it work with the new Twitter v2 stream API. Effects are available in the twitter-connector directory in nussknacker-twitter-example repository. I published docker image that contains this connector. It is available at: ghcr.io/touk/kafka-connect-twitter:7.2.1.

To use it, the only things that should be done are:

Now you should see that tweets are available on Kafka: http://localhost:8085/ui/kafka/tail?topicId=tweets

If you want, you can change the connector definition in twitter-connector.json - for example, adding “filter.rule”: “#bitcoin” will cause that instead of a 1% random sample stream, a complete stream of tweets with hashtag #bitcoin will be consumed. You can find more about filtering rules at Twitter API Documentation

For the sake of simplicity, in the example, I’ll use only simple SpEL rules to define what sentiment a given tweet has. The whole scenario looks like this: 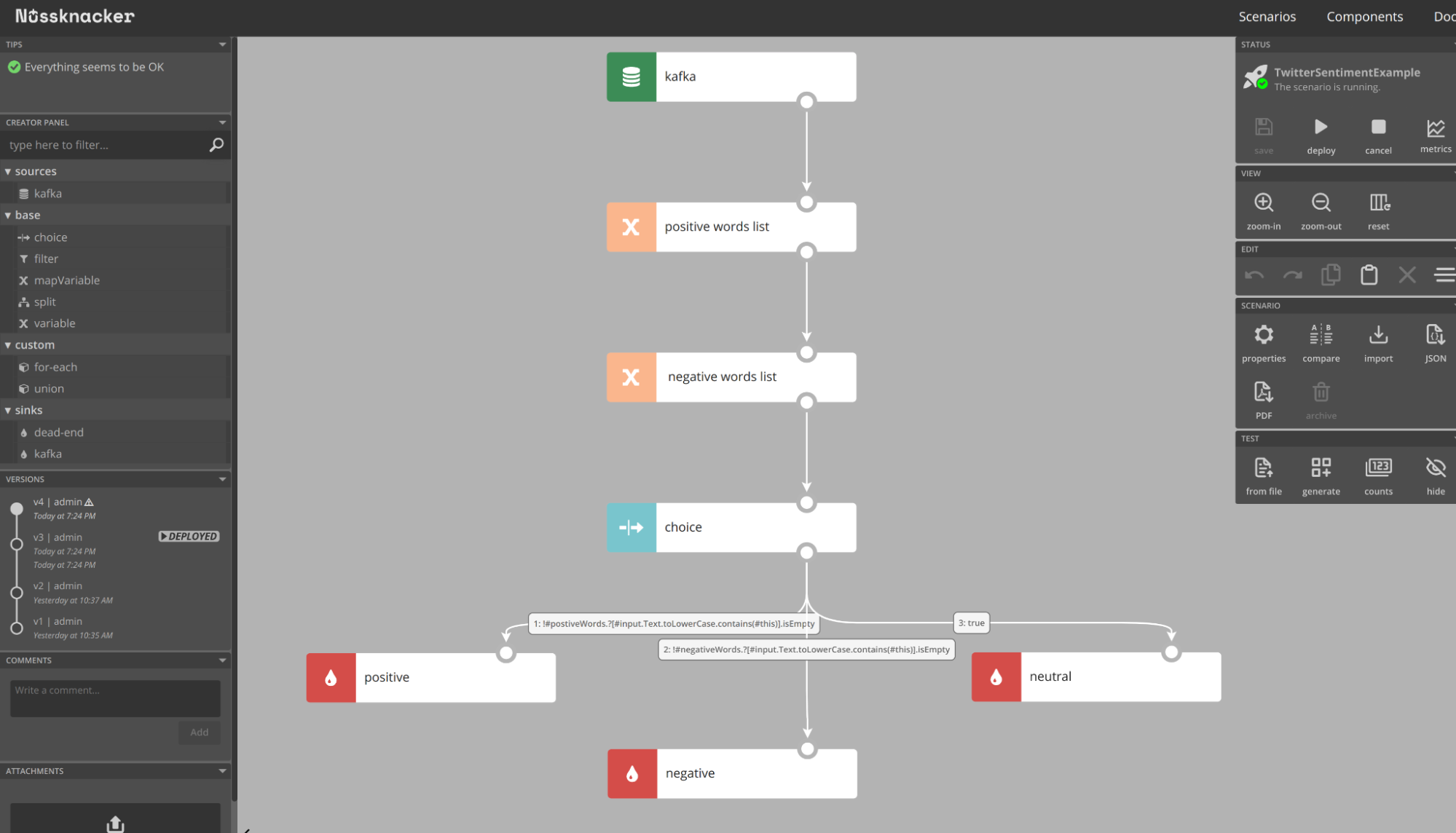 Firstly, it reads tweets from Kafka, after that, it defines two lists of words: with positive words and with negative words. After that, there is the most important part - the choice node with two expressions: 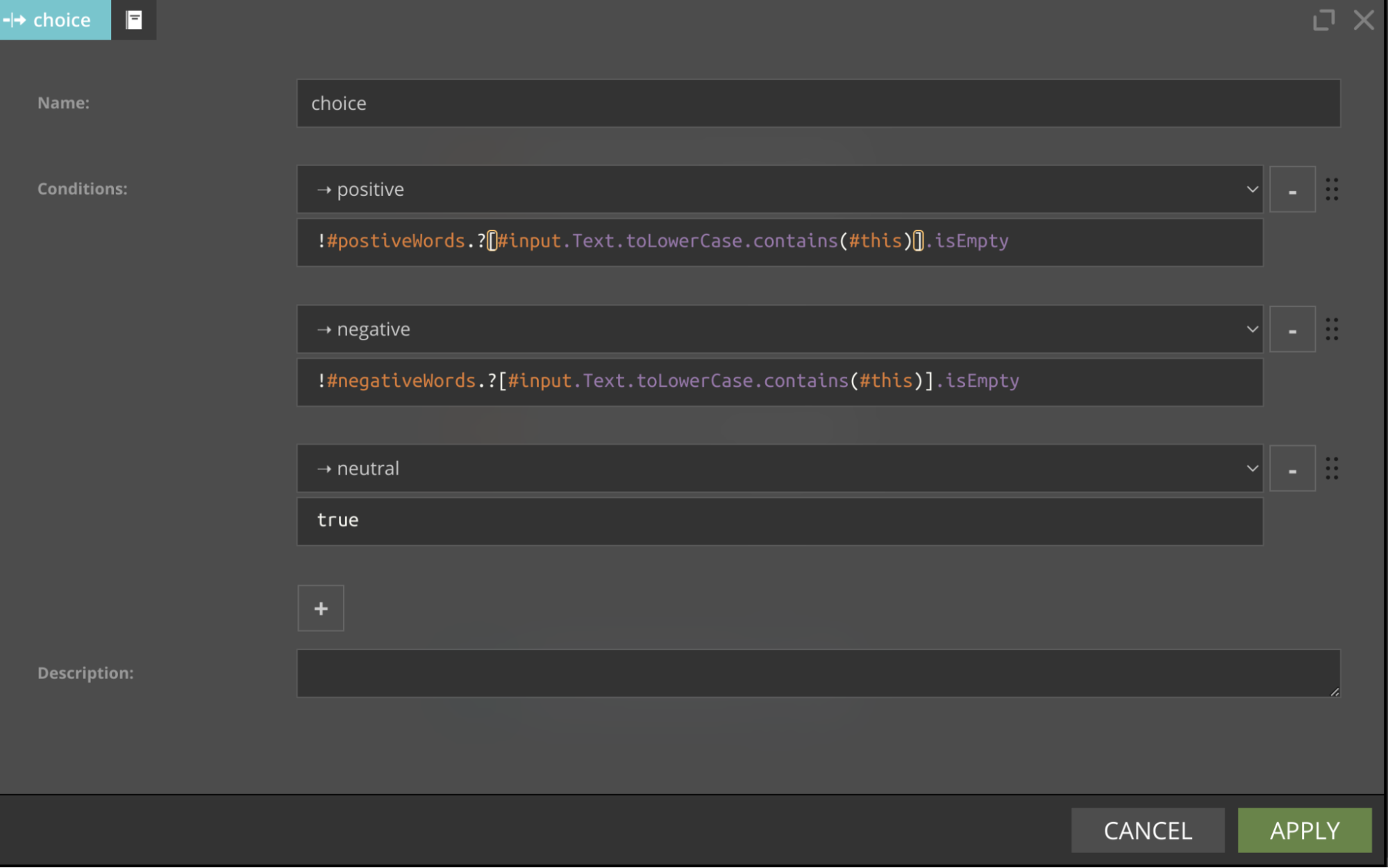 Both expressions look very similar. They check whether a positive (or negative) list of words contains tweet text. They use the SpEL filtering operator (.?) you can read more about it in SpEL Cheat Sheet.

In choice, we decide to which node, the result of processing will be passed. Ending nodes are just dead-ends. We don’t send results anywhere, it will be used only for the presentation of metrics.

The scenario is available in the repository in the TwitterSentimentExample.json file. You can import it on your own. After importing, just press the deploy button. After a while, the scenario will be deployed and you can check the results by clicking the metrics button.

The most important metric is “Events that passed the whole scenario”. The chart is dominated by neutral sentiment. After filtering it out, you will see that some tweets have also either positive or negative sentiment:

The whole input stream has a throughput of about 40-50 tweets per second:

We processed only 1% of tweets so we can assume that at the time of writing this post, the results are:

The experiment showed that Kafka tooling by design lets you easily ingest events in virtually any format. The only obstacle was the lack of support for Twitter v2 streaming API in Kafka Twitter connector but it will be improved in the near future. Once data is on topics with defined schemas, they are ready to be used in Nussknacker. What’s more, Nussknacker has a flexible expressions language that allows for defining decision logic. The results of computations are visible in a nice form on metrics charts.

It was only an example of how Nussknacker can be used for sentiment analysis. For more accurate sentiment analysis, NLP (Natural Language Processing) algorithms should be used. Without that, the sentence “I can’t say anything good about this” will be marked as a positive sentence! :-). The good news is that Nussknacker has integration with Machine Learning models in the Enterprise version. You can read more about that in another blog post on ML inference.

I highly encourage you to run this example on your own and experiment with SpEL and other Nussknacker features. You can also check this example in the Nussknacker demo - Tweet something on #Nussknacker or to @Nussknacker_io and check in metrics what sentiment had your tweet!